Video segments - about 8am. Perhaps male weaving with female silk

Video segments - about 5pm. In retrospect, these appear to be a cleanup exercise - unweaving the structures around her cephalothorax.

I visited the web about 8am (with my still camera and a Powershot S3 that I used to take some hand held videos). Realizing that I needed stable video, I returned about 4pm with the video camera. It appears that the male spent the morning building the web structure around her head while the late afternoon shots show a less cluttered cephalothorax region and the absence of the silk bundle projecting toward her left front leg. So I suspect he was cleaning up and unweaving. Perhaps his last meal?

Here is a presentation of the female in her launching position (where she waits for prey to become tangled in her web. There is a single strand of dragline silk that she attaches to an upper part of the web (sort of an escape and recover strand). The male is the small orange spider on her left side near the rear leg. You can see the black circular region on each palp where sperm is held for later injection into the female epigynum. 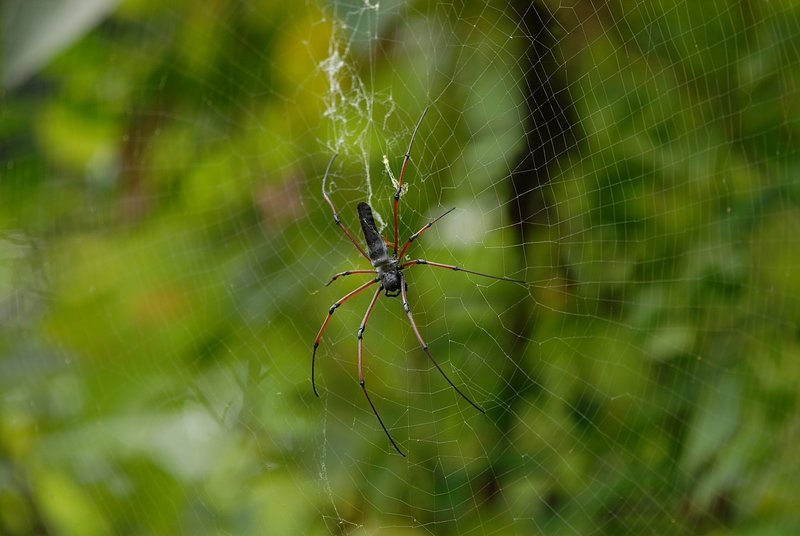 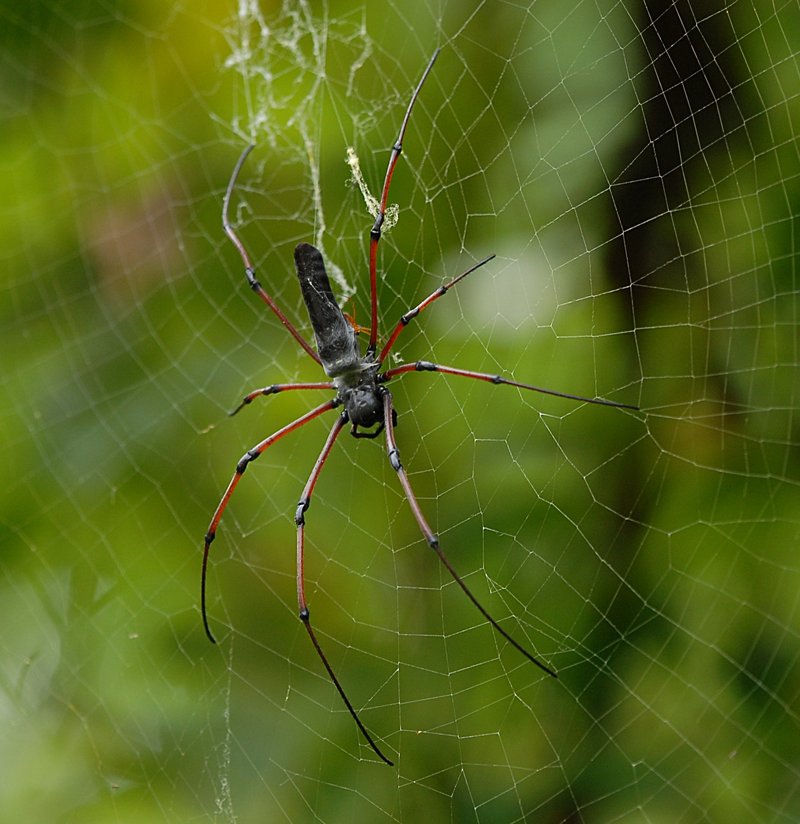 Here he is on her dorsal surface. You can see the bridge of silk projecting from the left side of her cephalothroax near the connection to her abdomen and attached to the third left leg (counting from her head). 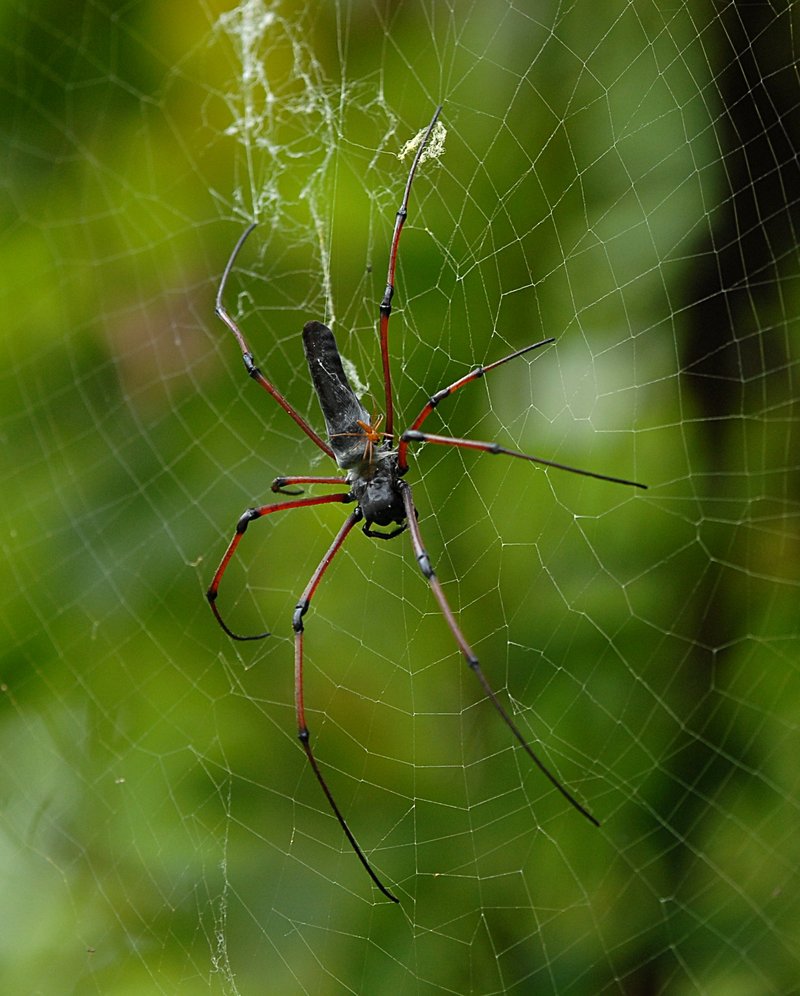 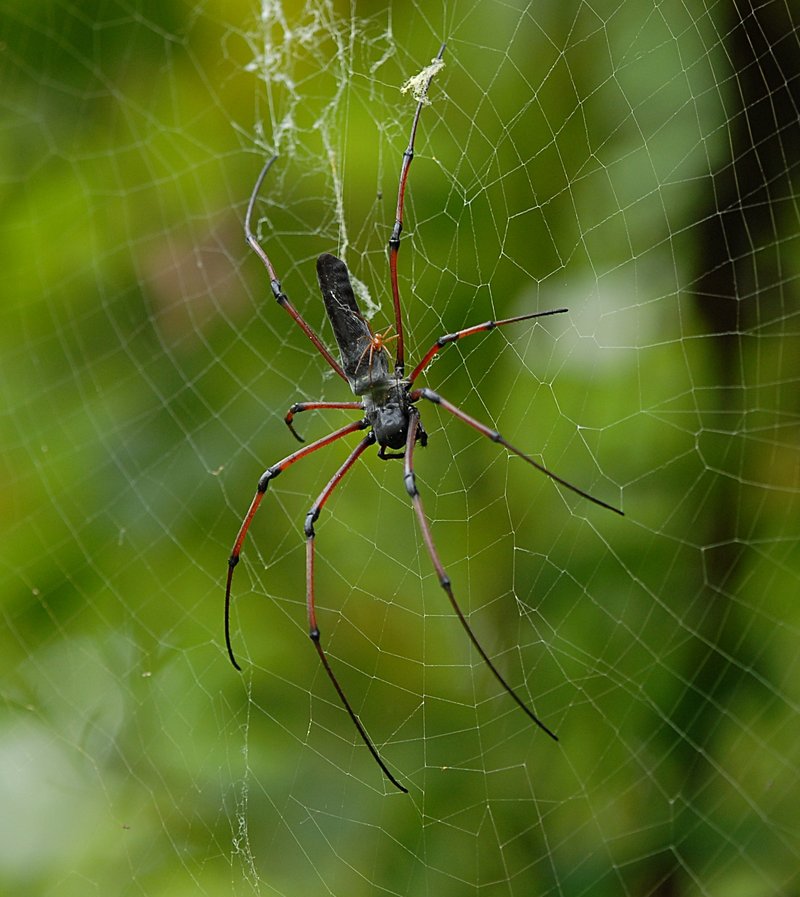 At the rear of her abdomen 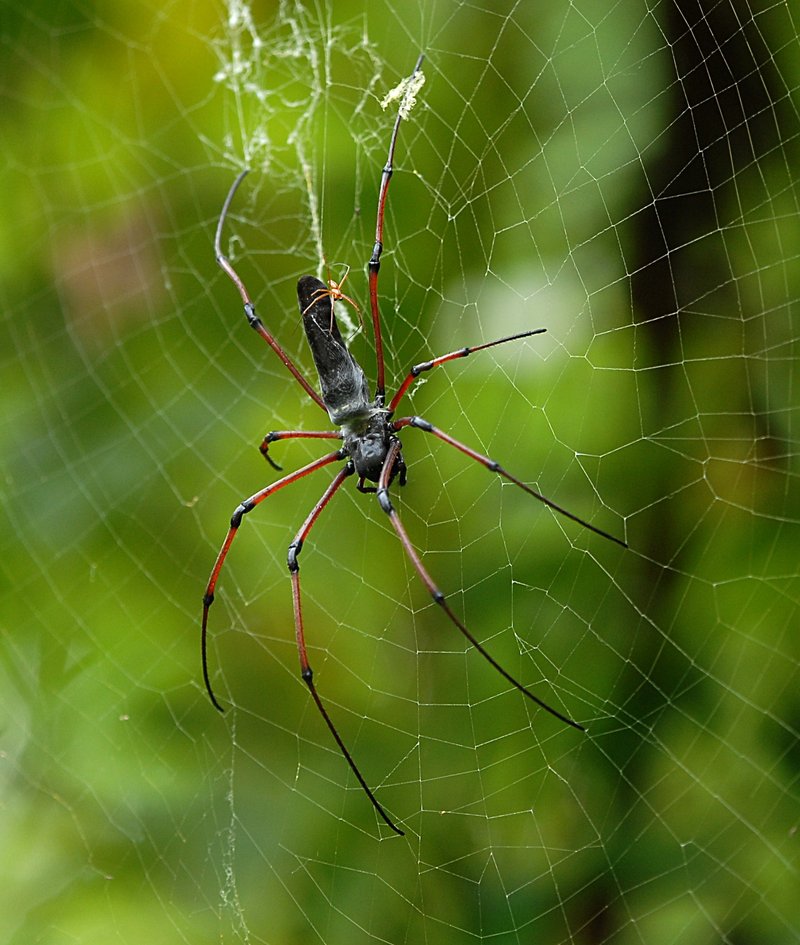 On the right side of her abdomen. If you look at the video (above) perhaps you can figure out what he is doing. 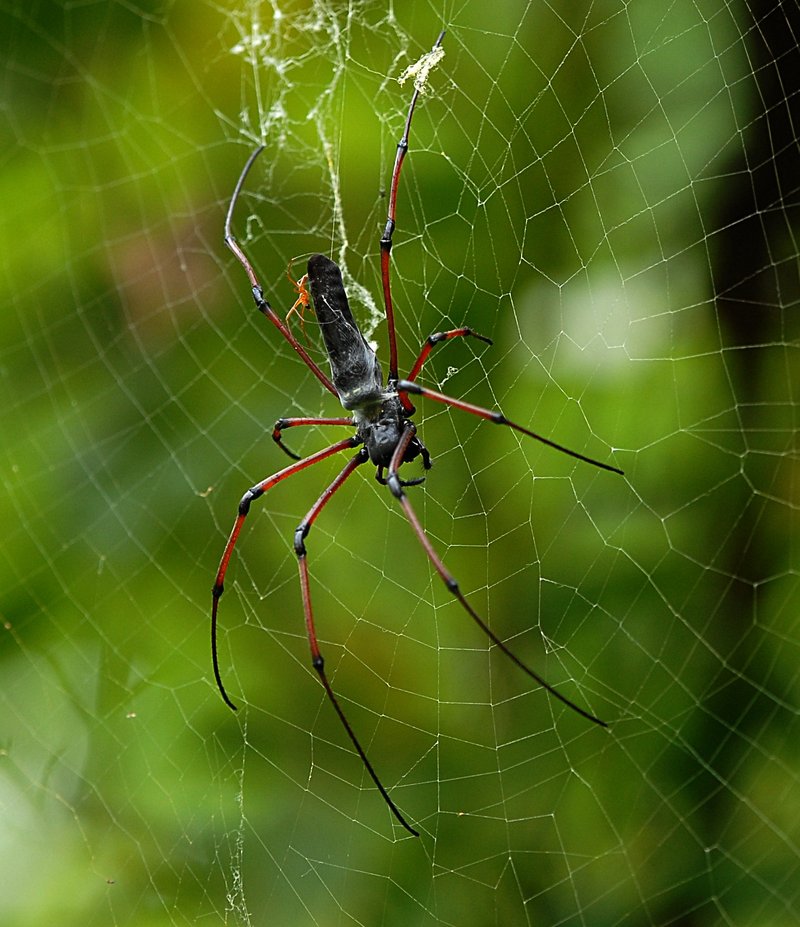 Though not clear, here is a closer view where you can see the black region of his palps and also the woven surface near the cephalothroax - almost like weaving a cover. 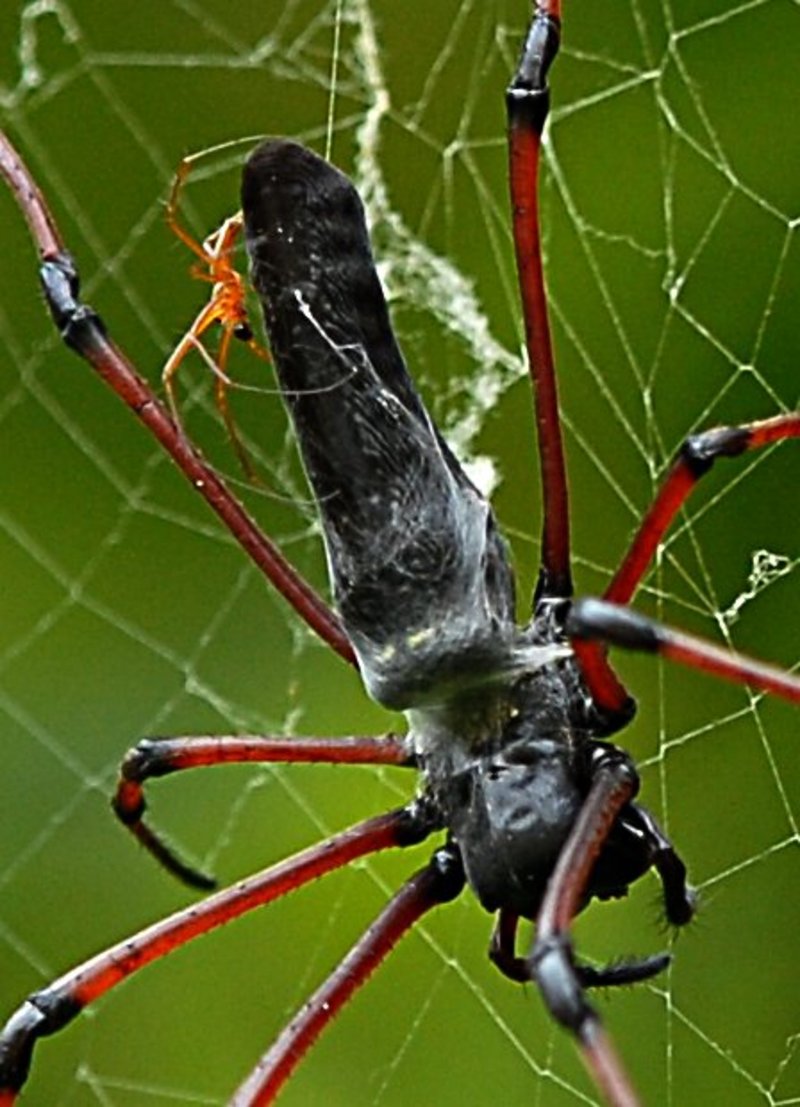 Here is a closer look at him as he wanders around her ventral surface. Again note the black tips of his palps. 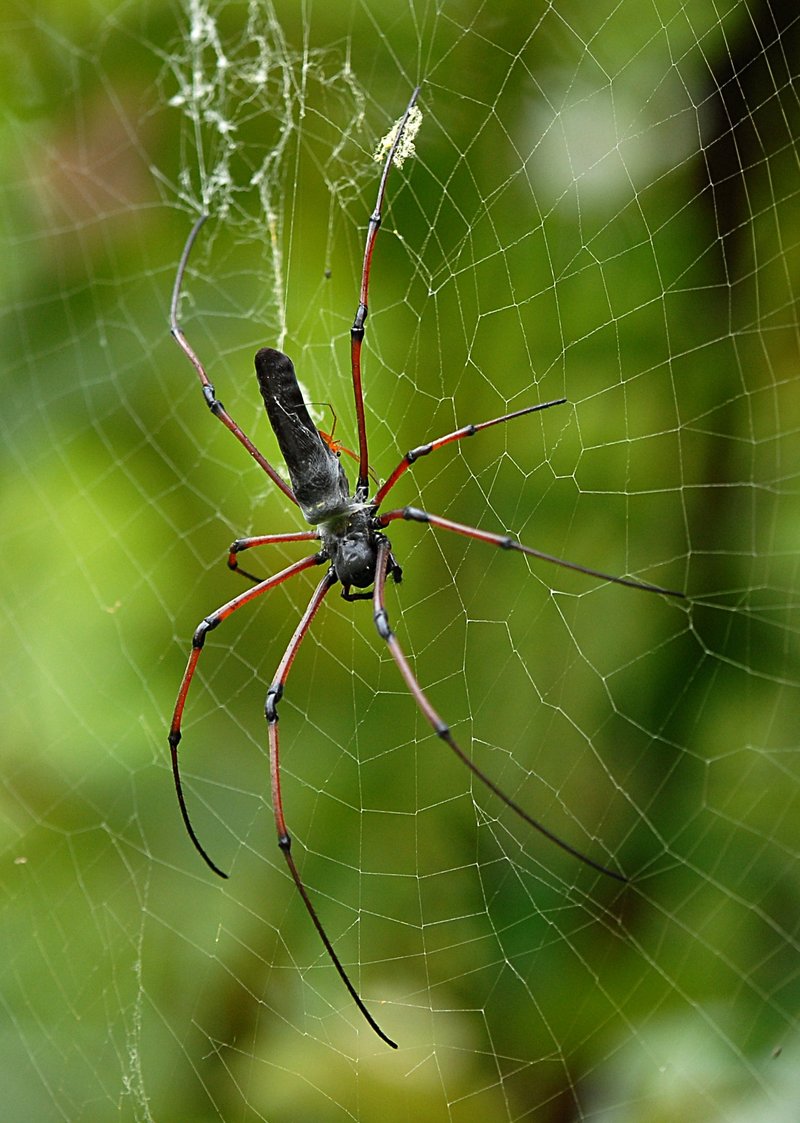 Here is a closer view - again, not so great focus. He appears to be attaching something since his abdomen is in the down position 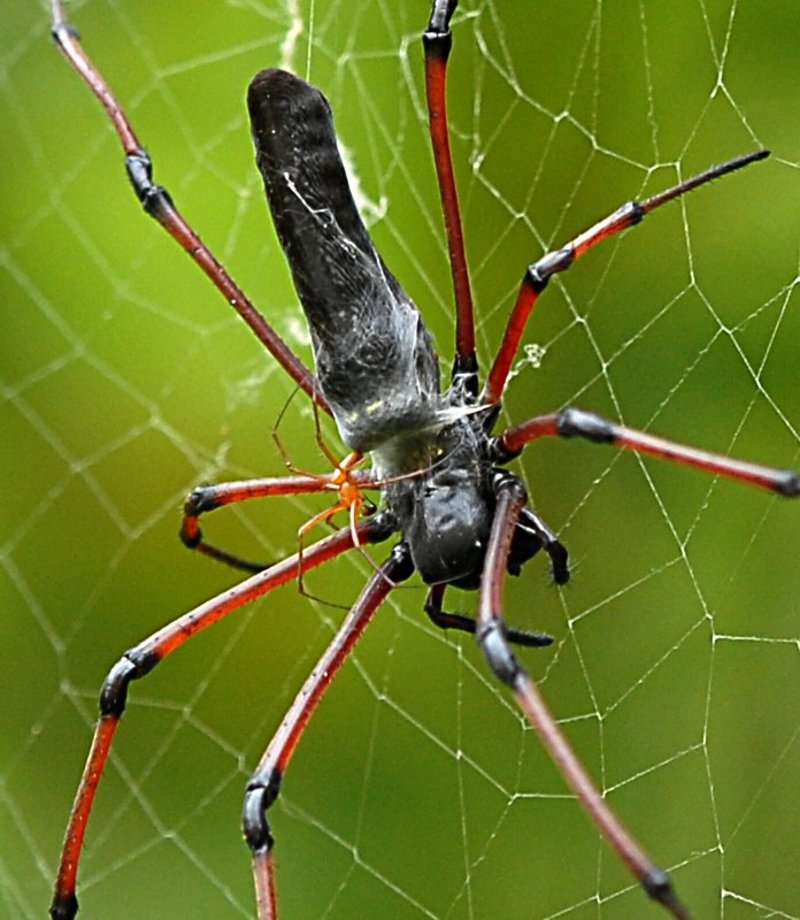 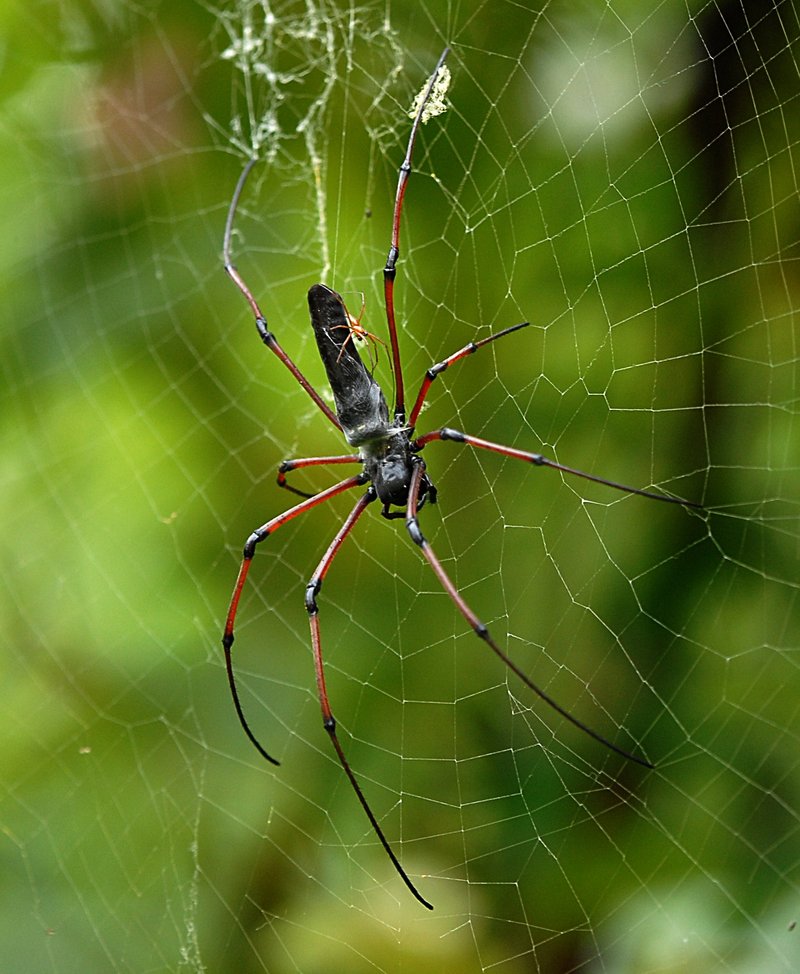 Here the male is dancing on her right legs 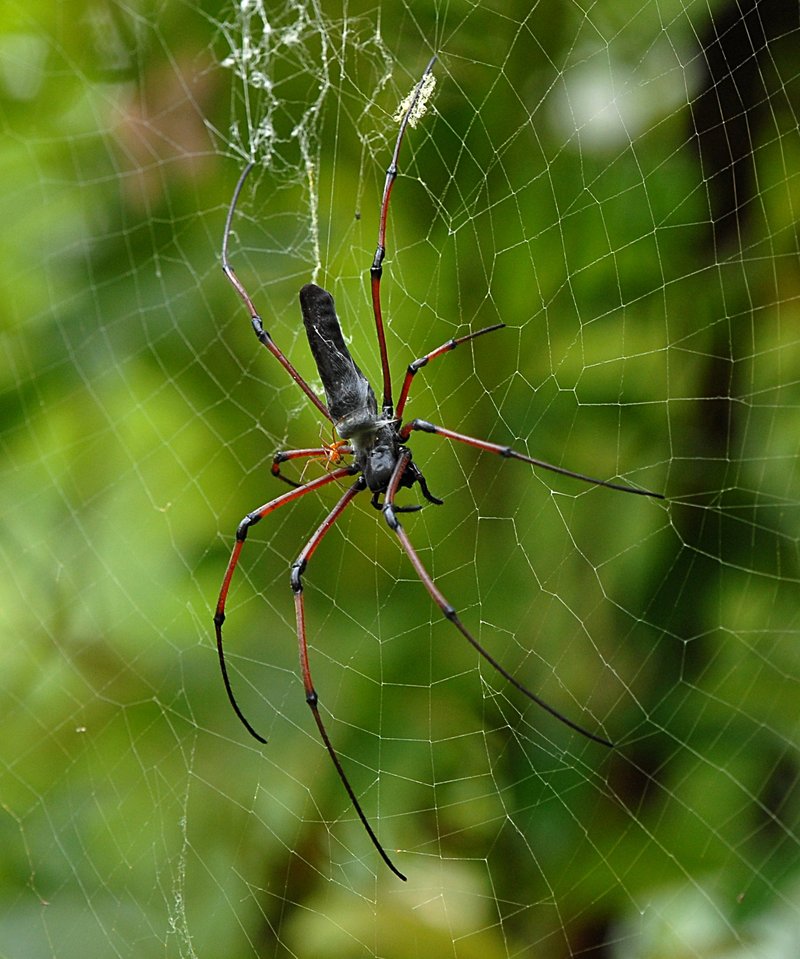 Nearby was another Nephila pilipes web - with two invading Argyrodes (see above her rear legs). 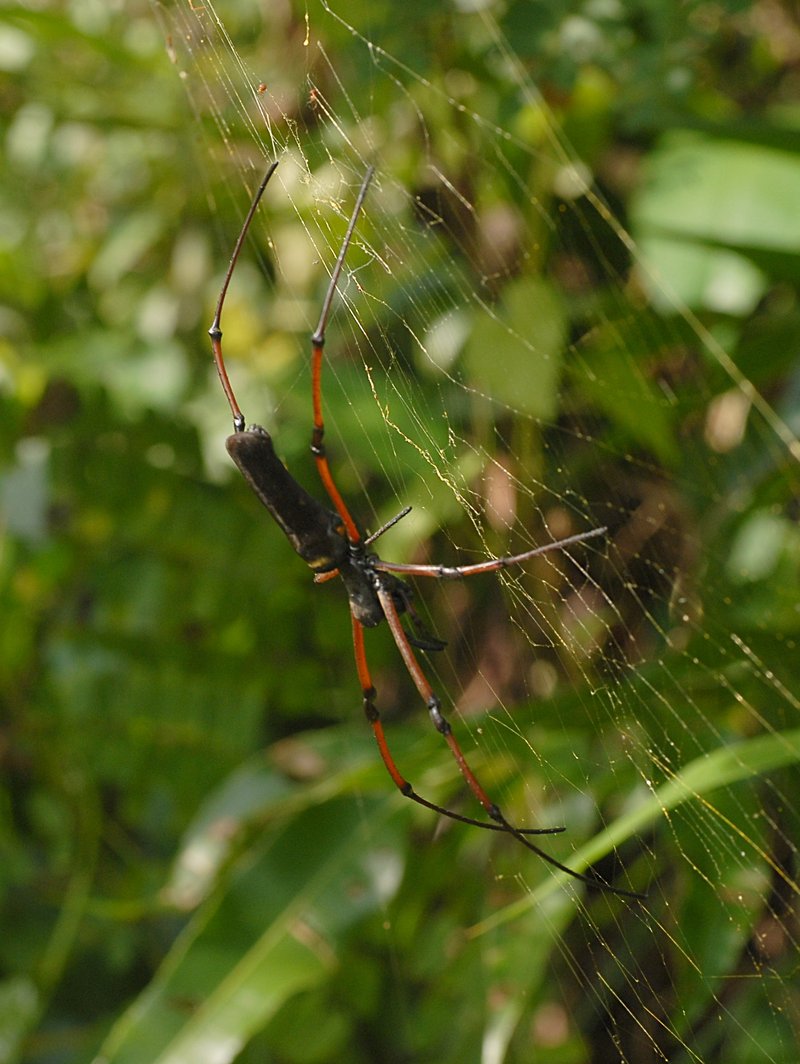 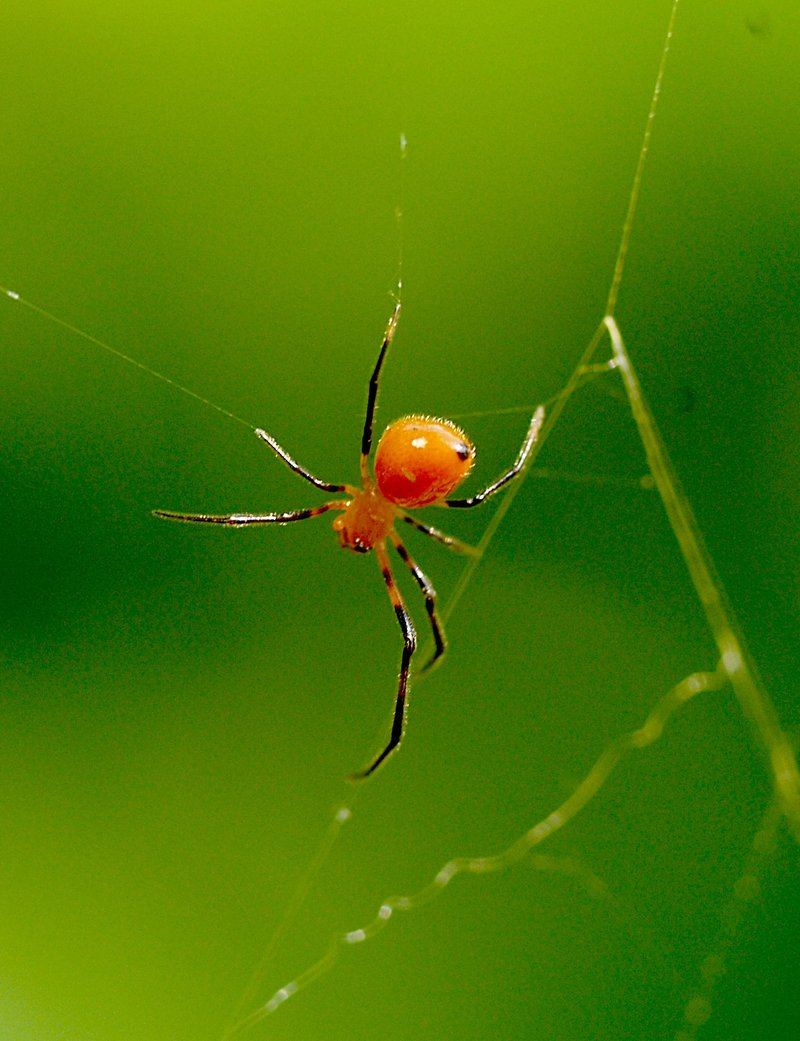 Her spinneret - For me, this was an unusual position - with her abdomen at about a 45 degree angle from the web plane. You can see one of the invading A. flavescens near the top. 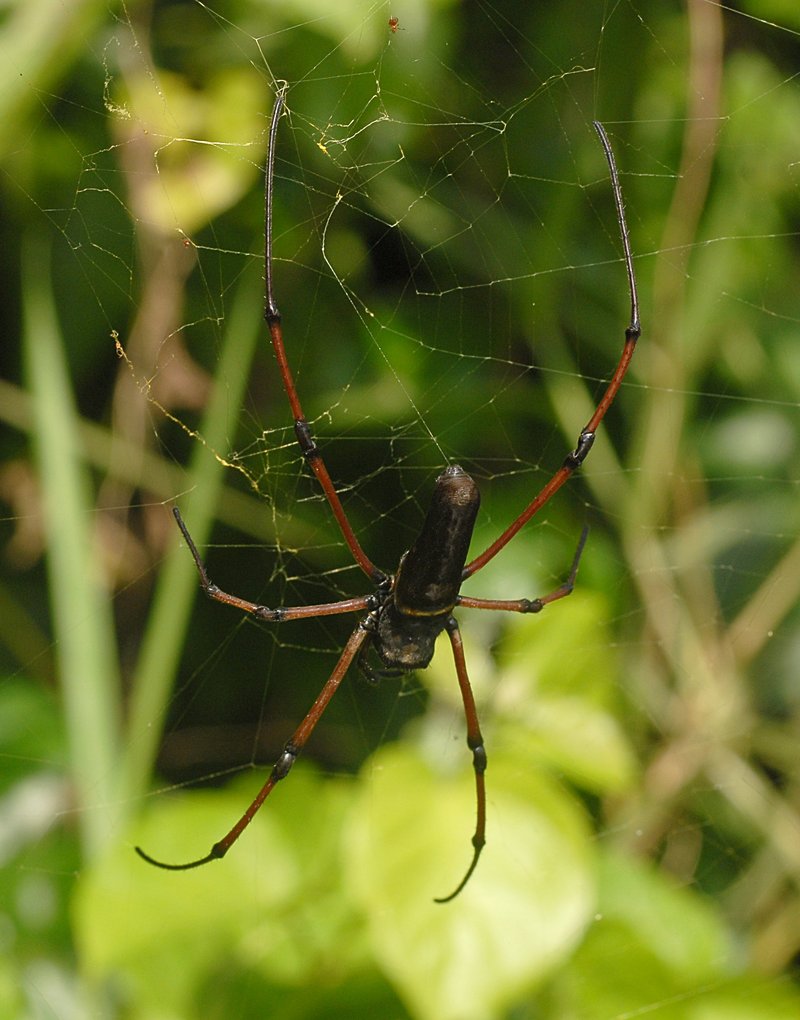 and different views of the A. flavescens 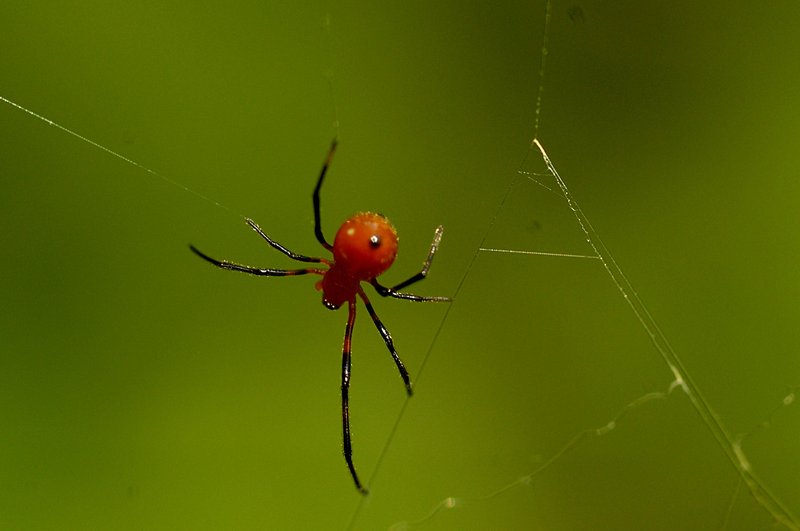 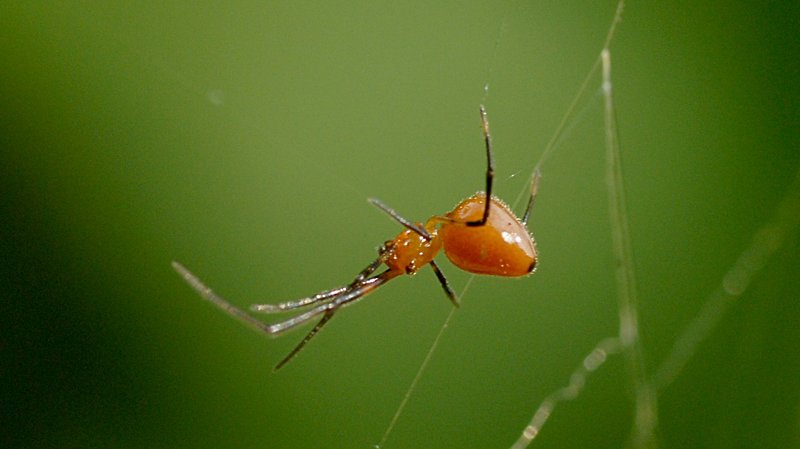 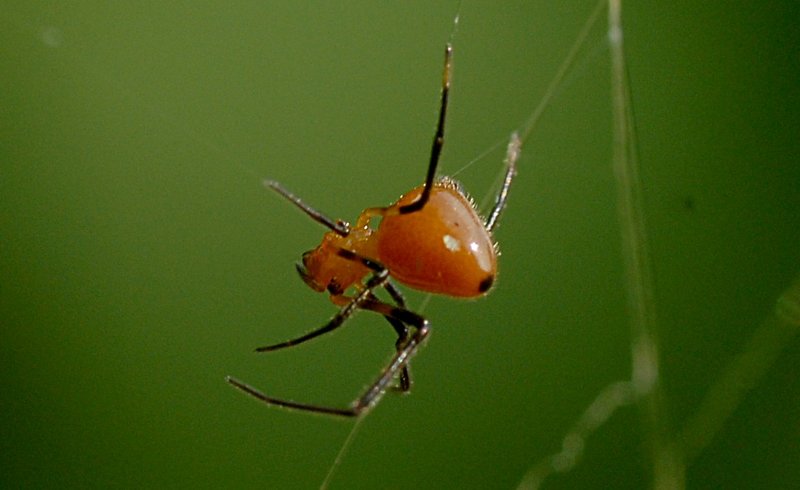 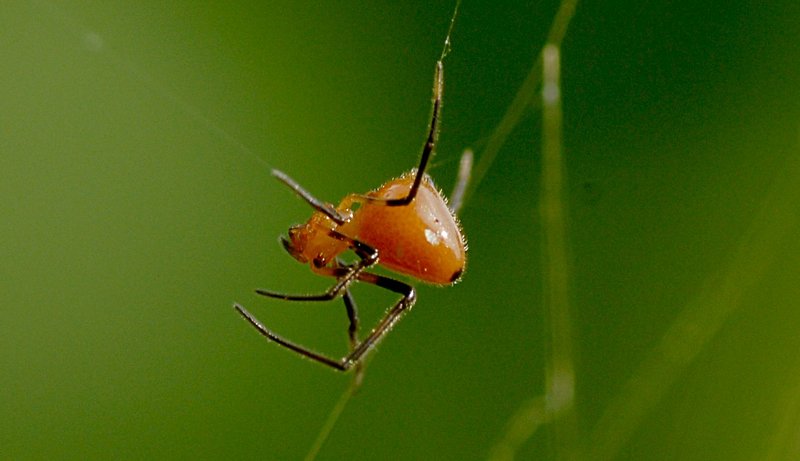 This is a fun photo - where the strand in the lower left corner progresses from a big blur to a focused strand as it approaches the focal plane. 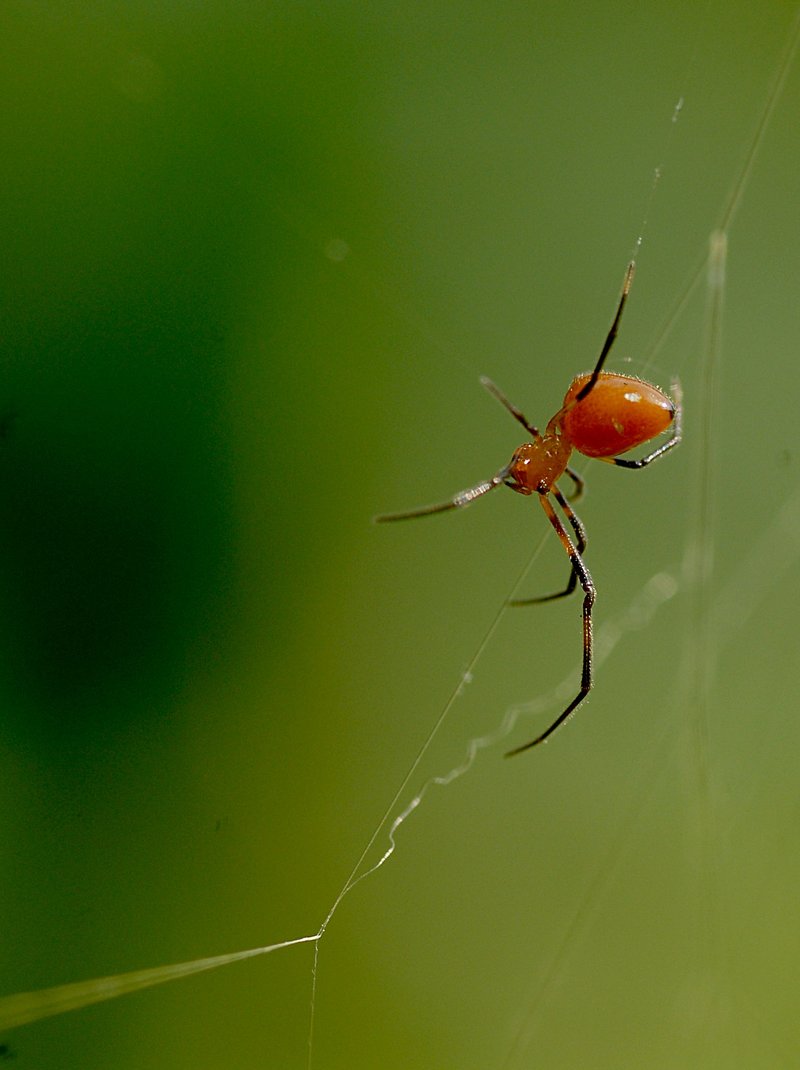 After visiting the Nephila web with Argyrodes I returned to the mating Nephila - about 5pm. It appears as if the male is cleaning up the cephalothorax web that was built during the morning. 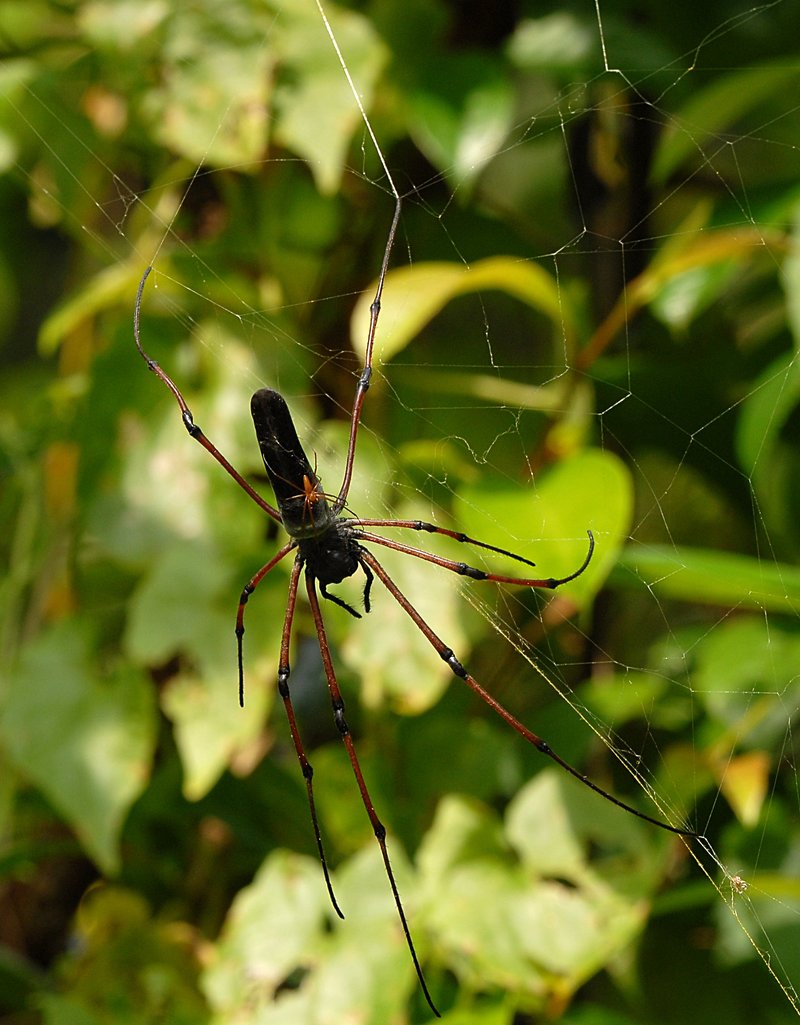 Note the absence of the bundle that appeared attached to the third left leg (counting from her head). 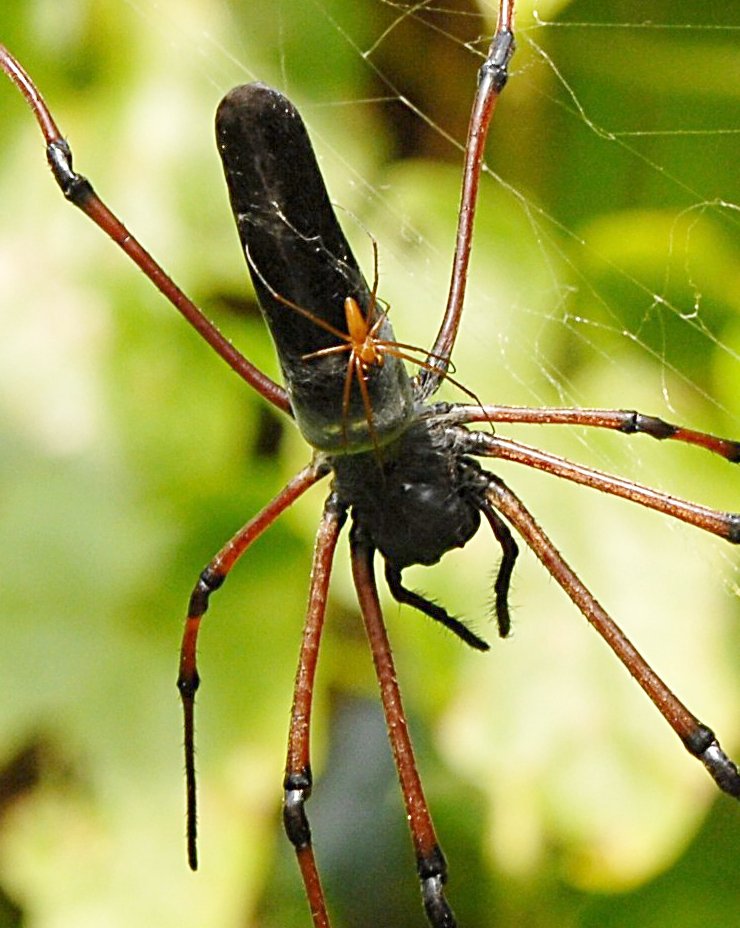 Here he is working around her left legs - maybe cleanup? 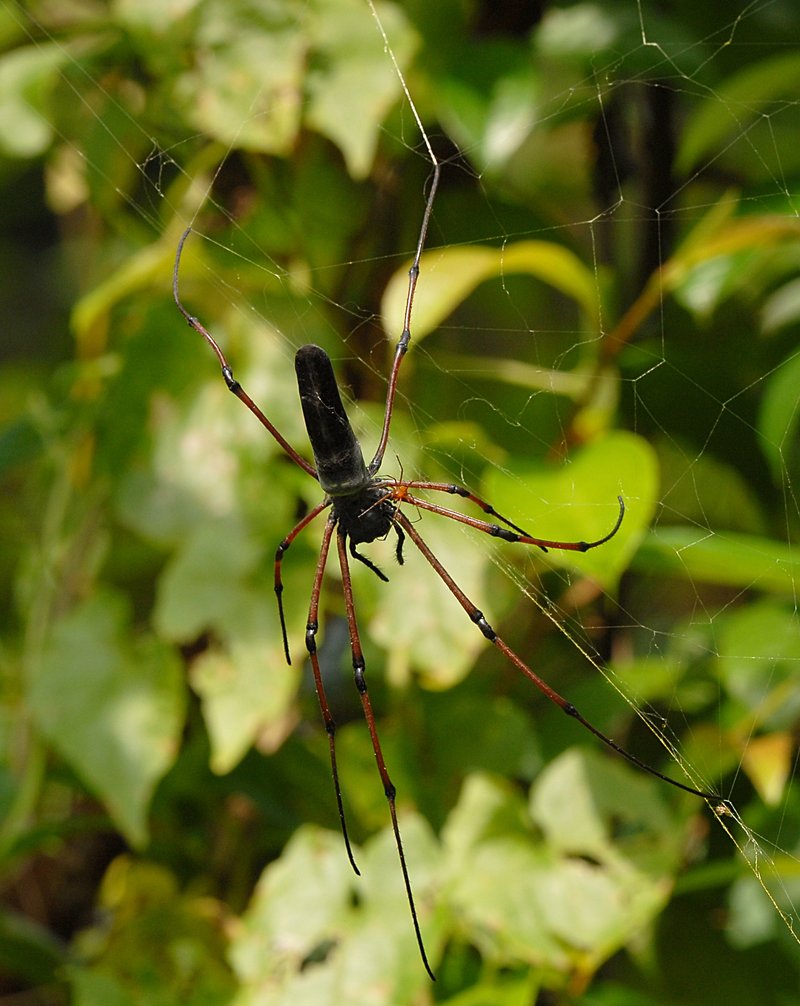 Then around the the right side of her abdomen 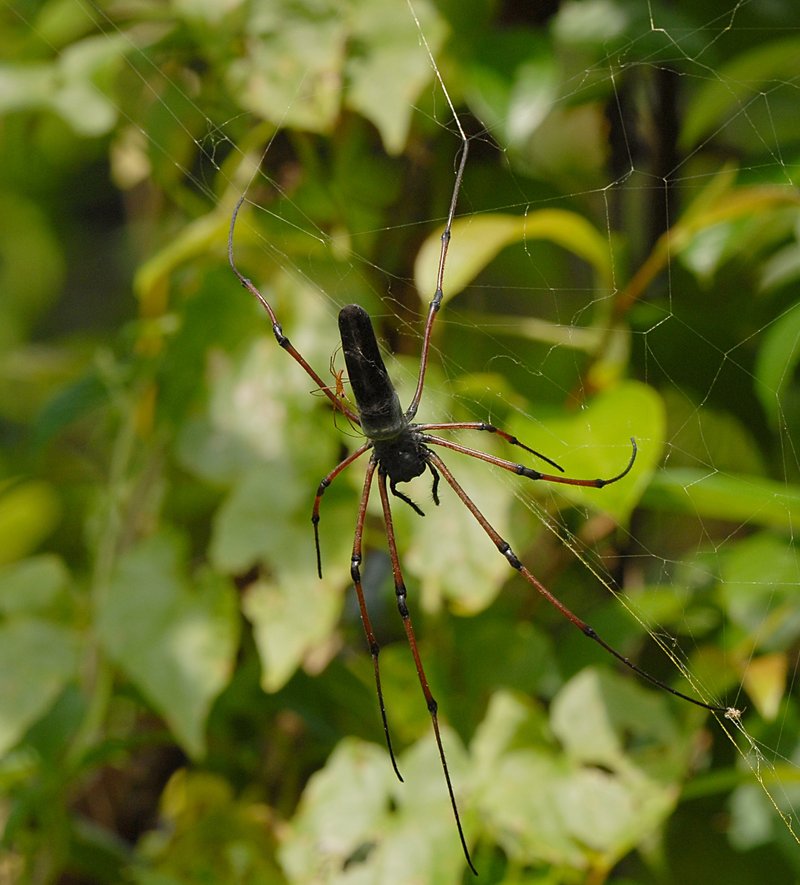 Then under to her ventral side 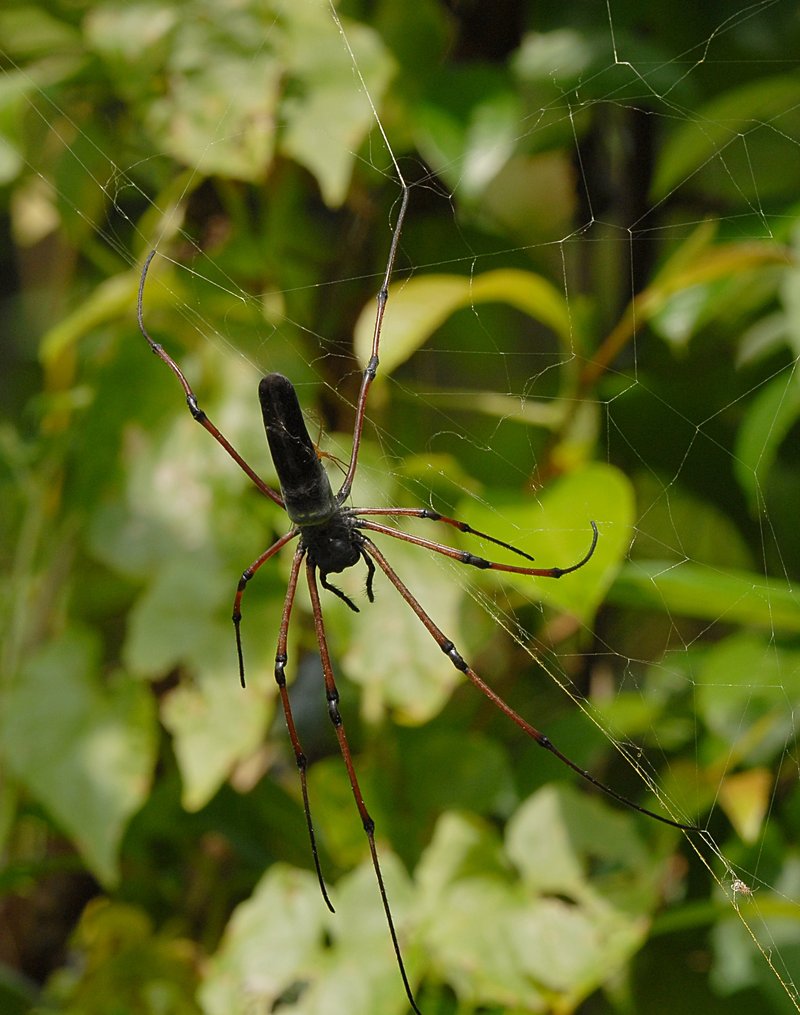 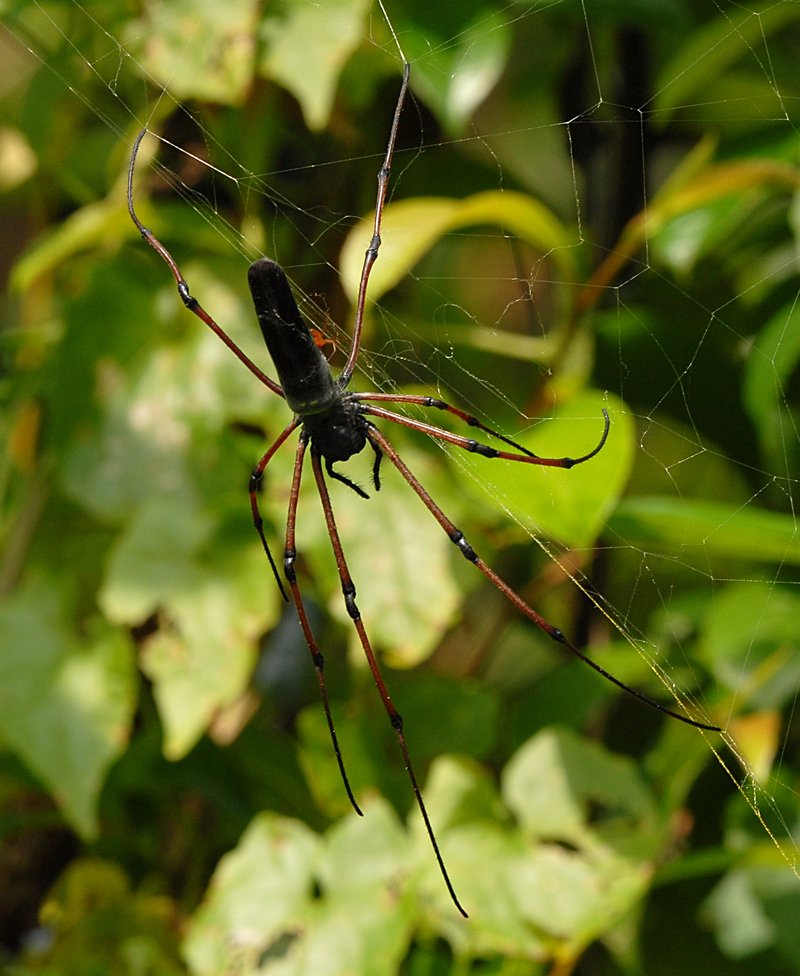